Gold, platinum and silver are considered precious metals, but it's long been known that when it comes to stopping the transfer of disease from surfaces we touch to people, copper is the killer metal.

In England, Professor Bill Keevil, Director of the Environmental Healthcare Unit at the University of Southampton’s School of Biological Sciences, was among the first microbiological researchers to experiment on copper’s efficiency against bacteria and then later viruses including a precursor to the current COVID-19 coronavirus.

Explaining how he became involved in copper research, Prof. Keevil said: ‘Back in the 1980s, we started to work on copper at the Public Health Laboratory Service’s Centre at Porton Down and subsequently at Southampton University, first in water systems and later on in contact systems. The reason for that were the outbreaks of Legionella bacteria, which caused Legionnaires’ disease in people. As a waterborne pathogen, Legionella is disseminated through drinking water and cooling systems. It showed that if people used copper pipes, the legionella numbers were much lower. In 2015, he even demonstrated this phenomenon with a coronavirus 229E (a predecessor of COViD-19).

Since 2009, the copper industry set up worldwide field trials in busy hospitals in the United Kingdom, Germany, Japan, the USA, Chile and South Africa, to transfer the research findings of Professor Bill Keevil and other experts into the real world of clinical practice. Participating hospital wards were fitted with copper alloy surfaces and samples were taken daily from those surfaces and compared with control surfaces. The results showed that the copper surfaces led to a 90% reduction of microbes. Bacteria and virus are both microbes with viruses being the smallest of all microbes.

In a recent Fast Companies article, it was noted that copper is a material that cultures across the globe have recognized as vital to our health for more than 5,000 years. When influenzas, bacteria like E. coli, superbugs like MRSA, or even coronaviruses land on most hard surfaces, they can live for up to four to five days. But when they land on copper, and copper alloys like brass, they begin to die within minutes and are undetectable within hours. “We’ve seen viruses just blow apart,” says Bill Keevil, professor of environmental healthcare at the University of Southampton. “They land on copper and it just degrades them.”

The irony that steel doornobs and surfaces look so sleek and shiny and have been replacing copper in hospitals since the early 1980's has not been lost on scientists who recognize that copper naturally kills microbes but stainless steel must be sanitized often. 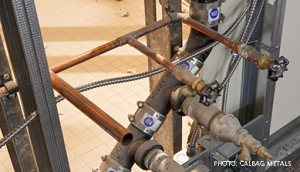 At Calbag Metals, we know plumbers have long recognized the benefit of copper transporting the water in our pipes. We recycle copper pipes, wire, semiconductor chips and more - allowing metal to quickly return as a new product, to everyday use. Maybe we'll start seeing more copper coins and even dollars as the infection killing properties of this metal are remembered. Hospitals may return to copper sinks and fixtures and even beds. Whatever the future, your copper is in good hands at Calbag Metals. It will go directly from us to being processed and reused for new items including copper sheet, pipes, sinks, beds, wires and more.

Fast Company:  Copper Kills Corona Virus. Why Aren't Our Surfaces Covered in it?

Healthcare in Europe: Copper: The Relentless Killer on Our Side